Circular openings sliced into an existing brick wall provide views through to exhibition spaces inside this shoe museum, which Amsterdam-based Civic Architects designed in Waaliwijk, the Netherlands. The Schoenenkwartier Museum presents the history of shoe design and production in Waaliwijk, which for centuries was an important center for traditional craft within the North Brabant region. Civic Architects was tasked with converting a cluster of heritage-listed buildings to house a collection of 12,000 objects, along with other museum facilities, a cafe, and laboratories for design and prototyping. The Raadhuis ensemble was designed by architect Alexander Kropholler to accommodate functions associated with the original town hall. It was built in phases in the 1930s and expanded in the 1980s with the addition of an office block. The Shoe Museum extends the principles applied by Kropholler in his original design, with the original layout of open arcades and a small kiosk complemented by new arched windows framed in thick oak. Civic Architects said that they applied subtly subversive design details to nuance Alexander Kropholler's overly restrictive and rigid architectural views. As such, the addition was not a fashionable or contradictory icon but a fresh new chapter in the historically layered story of the building. 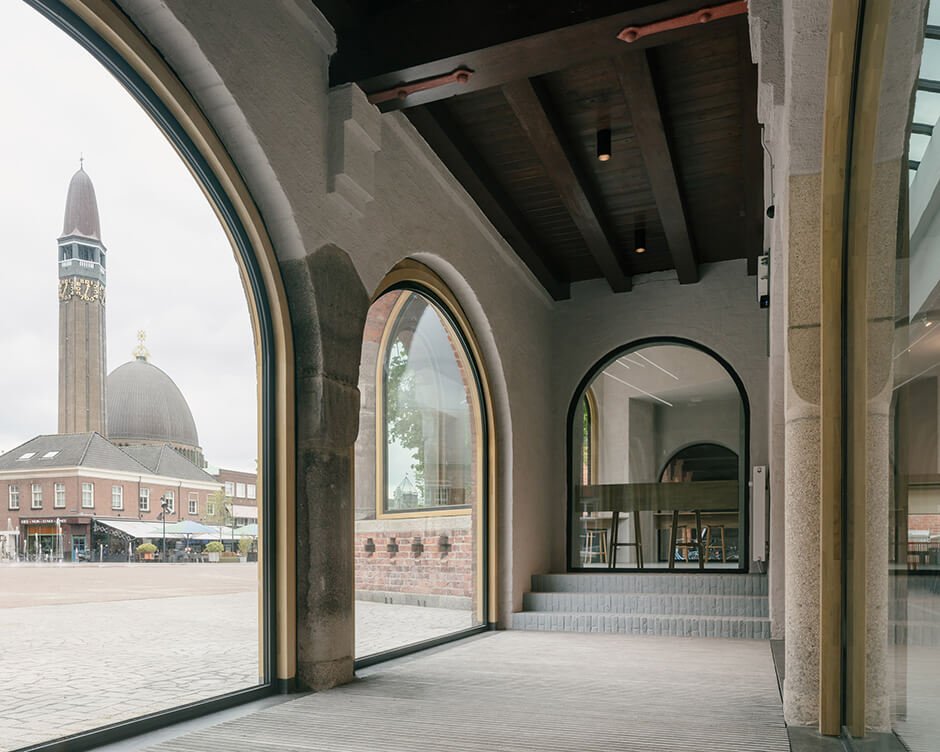 The museum occupies a prominent site on Raadhuisplein square, from which its main public functions – including the cafe and open workshops – are visible through the large, arched openings. The building can be entered from the square or from an adjacent arcade through large pivoting or sliding doors. The entrances lead to a generously proportioned foyer featuring a brick path that makes it feel like an extension of the public square. The central foyer connects with the rest of the open-plan ground-floor spaces, which include the cafe and exhibition areas, which were designed by Dutch studio Tinker Imagineers. Visitors can choose their own route through the building, with carefully positioned staircases and corridors providing shortcuts between key areas. 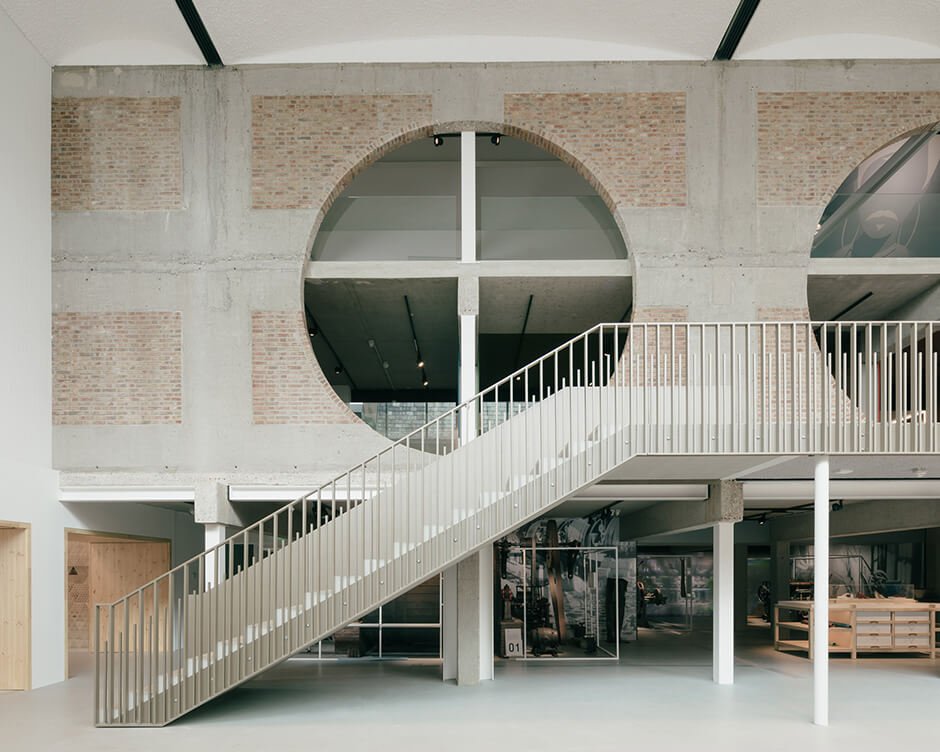 One of the main interventions to the existing structures is a row of circular openings cut into the facade of an office wing added in the 1980s. These apertures provide a glimpse of the exhibitions from the lobby. The preservation of existing elements retains a connection to the site's history, while a robust and tactile material palette aims to ensure the new additions will withstand regular use and improve with age. The tone in the complex is set by familiar materials such as brick, steel, concrete and wood. They reinforce the atmosphere of the collection and of the historic building, thus forming one collective artwork. The retention and adaptive reuse of the existing facade reflect the circular design approach promoted throughout the Shoe Museum's design and manufacturing labs. 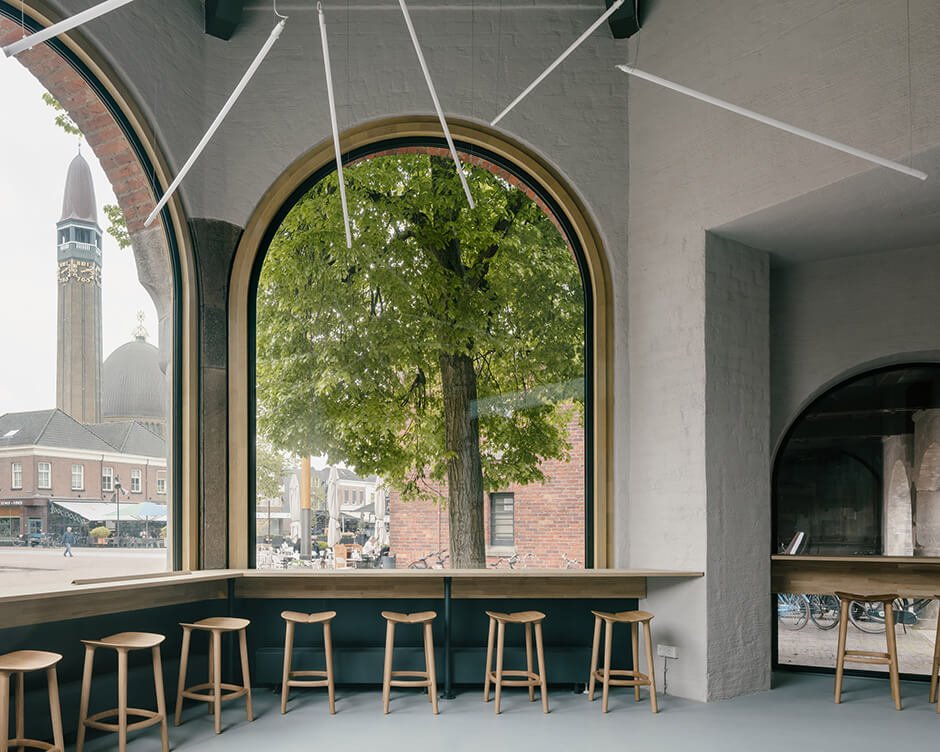 Civic Architects reinforced this philosophy by utilizing various recycled and reusable materials. The main reception desk is made from a lime hemp composite, while the synthetic-felt ceiling panels are manufactured using recycled PET bottles. The entrance area features a sculptural wall made from ceramic tiles with different relief patterns that were molded in 3D-printed forms. Creative agency La-Di-Da helped develop the wall, which uses waste salvaged from other glazing processes.
Civic Architects specializes in public architecture, including libraries, religious buildings, museums and infrastructure projects. The firm's previous projects include the transformation of a former locomotive shed in the Dutch city of Tilburg into a bright library and events space. 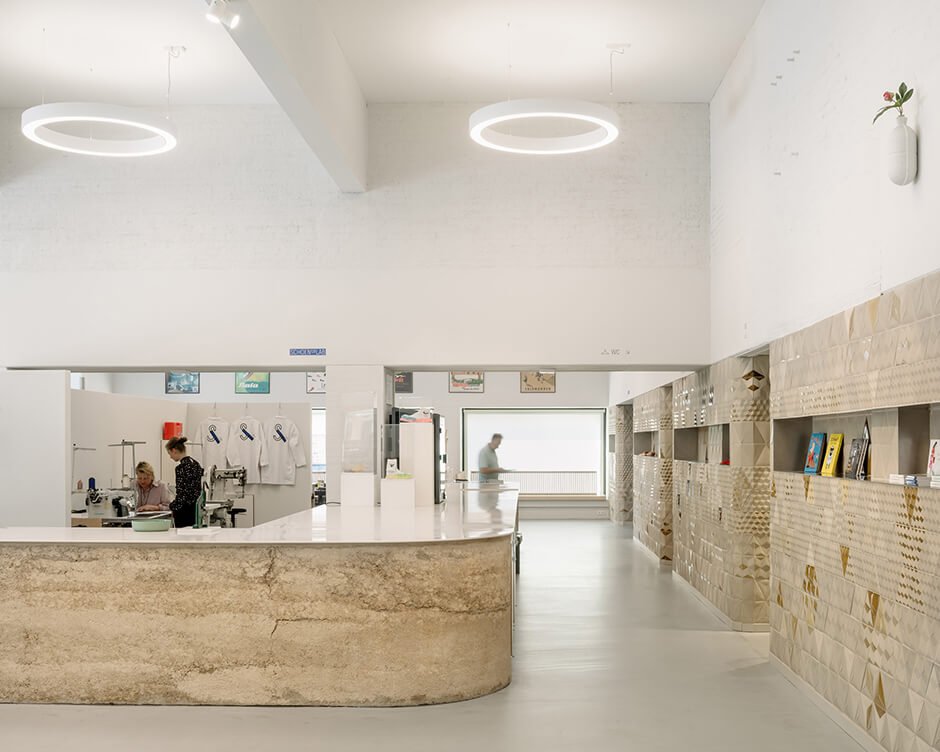 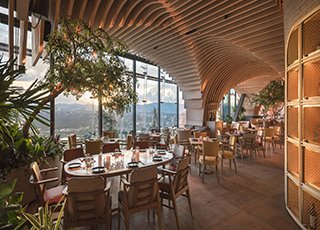 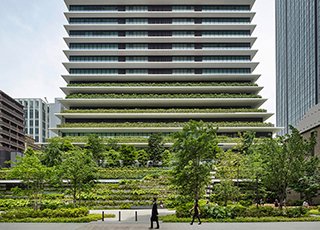 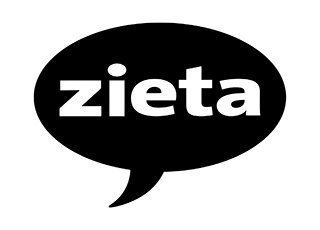 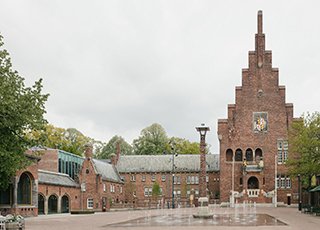