Using 3D printers, automated systems, and cutting-edge building technology, several architects have begun to investigate the many techniques that may make human colonization beyond the planet Earth easier.

Humans have been exploring Mars for a long time. The explorations have grown to a mission with multiple aims, from the first landing on Mars in 1971 to the deployment of the first-ever successful rover in 1997.

In 2021, the US, China, and the United Arab Emirates (UAE) sent three probes to the same location at the same time to collect samples and other study materials in order to broaden the studies.

Today, these missions have been upgraded even further in order to pave the way for a manned spaceship to land on Mars by 2022, according to Elon Musk.

Some architects have been studying the many approaches that may permit human colonization beyond the planet Earth using 3D printers, automated systems, and cutting-edge building technologies.

Even NASA has organized competitions like the "3D Printed Habitat Challenge," which have aided in the investigation of new technologies and ways in space exploration.

In this article, we've gathered works of some studios to show the ever-increasing possibilities of human existence on Mars. 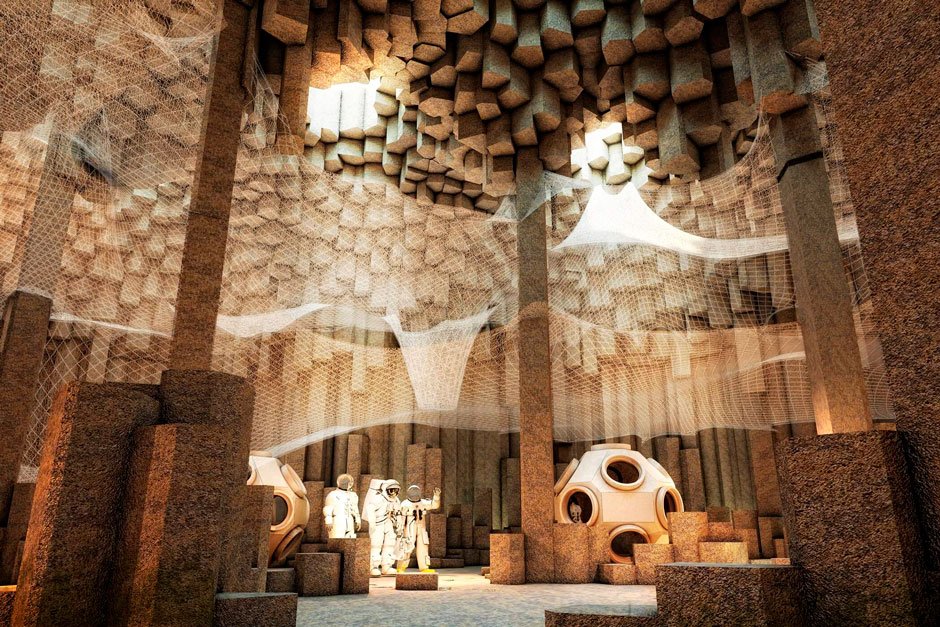 In 2013, as part of the Mars Colonization Project, German architecture company ZA Architects built an underground network of caverns for human inhabitation on the planet. The company proposes creating enormous caverns in the planet's basaltic rock surface to house a basalt processing facility as well as an artificial subterranean glacier to provide oxygen and water to the residents utilizing robotic technology.

Foster & Partners followed up their idea for living on the Moon with a design for a modular home constructed for life on Mars, which they displayed during a NASA competition. The Mars Habitat plan consists of a settlement constructed by pre-programmed and semi-autonomous robots. 3D printing would be used to create sturdy living quarters out of natural Martian rocks, which might accommodate up to four people. The proposal was one of the competition's 30 finalists. 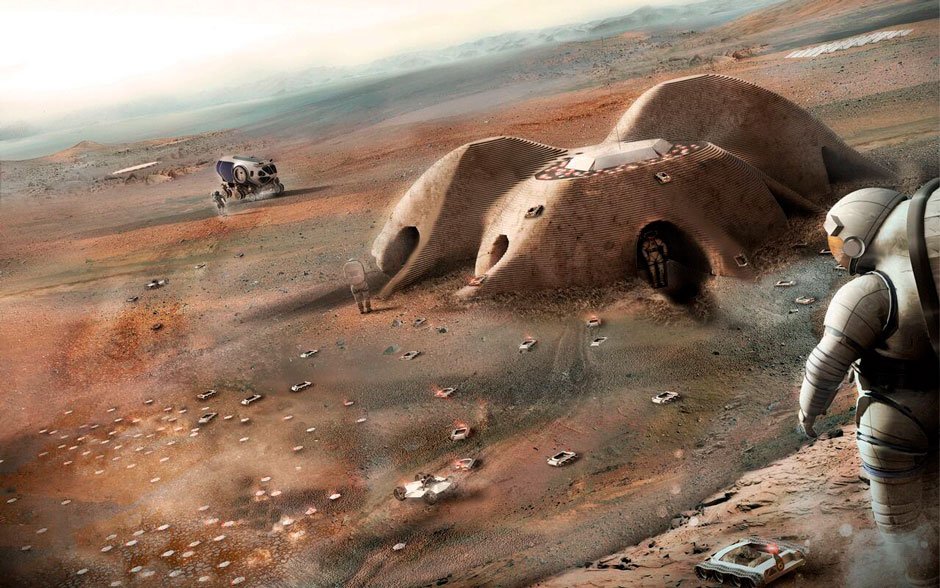 Hassell Studio and Eckersley O'Callaghan collaborated on this project in 2018, and it was pre-selected as one of the top ten concepts in NASA's Centennial Challenge. The design is focused on the human element of space design, which is often more concerned with optimum efficiency and output than with comfort. Its outside is made up of an autonomous robot-built Regolith structure, while the interior is made up of inflatable "pods" that hold all of the needs for life on Mars. 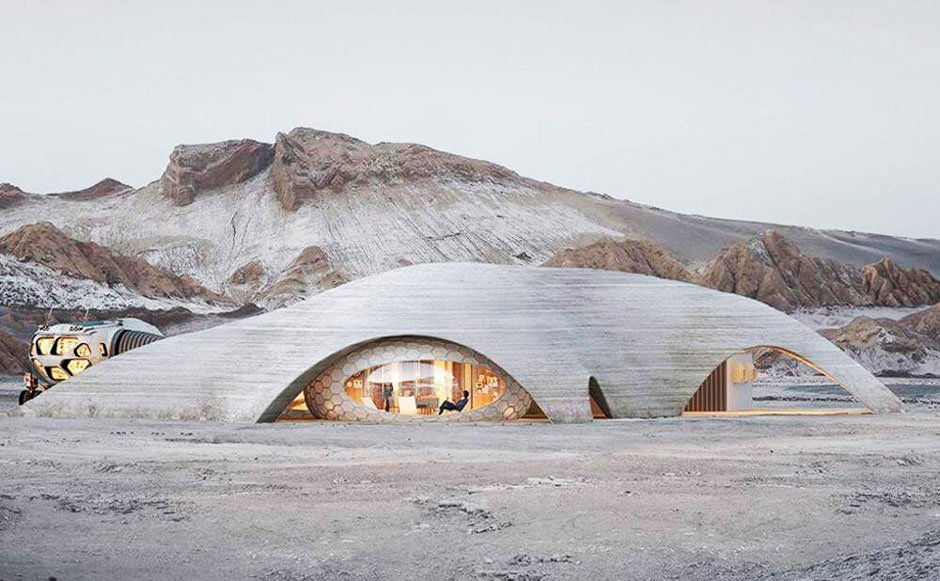 Martian Seed Of Life by Warith Zaki and Amir Amzar

Malaysian architects Warith Zaki and Amir Amzar proposed building a settlement out of bamboo in 2019, while researching alternative materials for the first Martian settlements. Bamboo was chosen because of its ability to withstand extreme conditions on Mars and its ability to propagate without pollinators. Furthermore, due to the amount of carbon dioxide in the planet's atmosphere, bamboo may easily grow on the planet, making it a plausible source of food for human inhabitants.

The Nüwa Project by ABIBOO Studio, which will be released in 2020, is the outcome of a rigorous scientific study conducted by SONET for The Mars Society. The concept is made up of modular, expandable fixtures that are arranged on a cliff to construct a self-contained, self-sustaining vertical metropolis that can house a million people. The rock itself acts as a natural shield from the Martian environment. 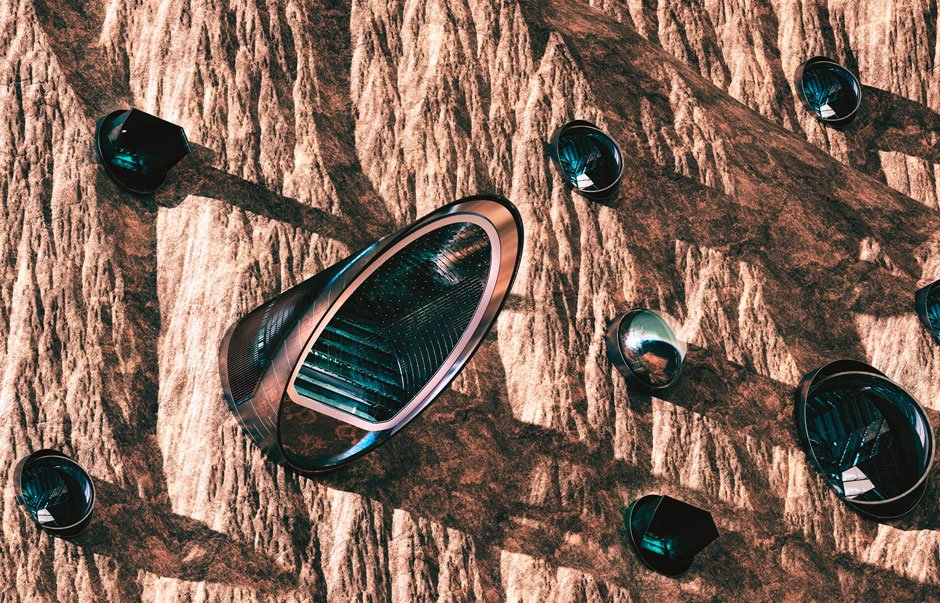